The Canterbury Belles was performed at the Marlowe Studio in May 2017, and was well received, being sold out on the Saturday night performance! 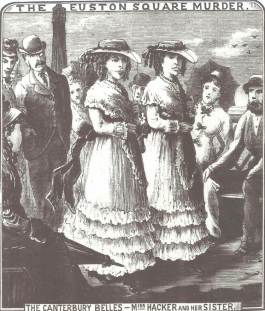 The Canterbury Belles is a story of intrigue and murder and tells the tale of the eccentric sisters, Matilda and Amelia Hacker who lived in Canterbury in the 19th century. The sisters and their doting father lived at 74 Wincheap, which was until recently an Indian Restaurant.

The Belles were a renowned spectacle in the Kentish seaside towns where they frequently promenaded dressed identically in youthful and gawdy outfits, even as they advanced in years.

So how was it, that Matilda Hacker finds herself in a Canterbury gaol and then 5 years later, her corpse is discovered in the coal cellar of 4 Euston Square, London?

Suspicion fell on the maid Hannah Dobbs who was tried at the old Bailey for Matilda's murder but acquitted due to lack of evidence. It was a sensational story at the time, even being reported in the New York Times and the ‘kiss and tell’ publication, Illustrated Police News. Hannah was quite a celebrity and even had a waxwork placed in Madame Tussaud's.

Hannah’s biggest revelation was, that she and the married landlord, Severin Bastindorff had been having an affair. Hannah alluded to the possibility that he had committed the murder. However, as in all detective stories, there are many curious anomalies and false trails, and many suspects with plausible motives .Who did kill Matilda Hacker? What was the motive?

The RPC endeavoured to solve the mystery, in a musical ‘Whodunit’.

The above cartoon is taken from the Illustrated Police News of 2 June 1879.