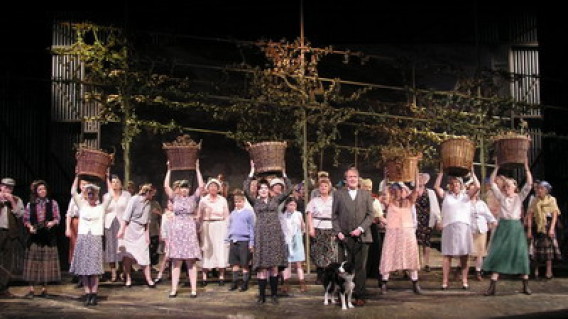 We are a group of enthusiastic amateurs some of whom met when performing in 'Promised Land', a highly successful community opera project which was written, composed and directed by professionals. Promised Land was performed at the Marlowe Theatre as part of the 2006 Canterbury Festival.

It was such a fantastic experience that we decided we would like to continue to perform more novel theatrical works.  And because we all live in Kent, we decided that our future works would have Kentish themes.  We use and enjoy professional support wherever possible.

We aim to produce innovative musical works which have been written specially for us, often by members of the Company.  We would like to involve ourselves with the Kent community and we intend to encourage new writing and performing talent by forming links with universities, colleges, theatres and other local venues.

Several of our productions have been performed as part of the Canterbury Festival fringe.

Alongside our productions, we run a variety of musical and theatrical workshops as well as social and fundraising activities.

We often take our musical performance to the residents of care homes in East Kent.

We have benefited from funding from the Lottery “Awards for All” and the Canterbury Arts Council.

Fate is strange. Lewis Edmunds first met Jane Jones 15 years ago when he was at school and she was his dentist.  Now they’ve got together to write a brand new musical called Dreamlands.

This came about when the pair met up again on the stage of the community musical “Oh Mr Pooter!” at the Whitstable Playhouse in 2011.  Jane wrote the script for Dreamlands in the back seat of a car travelling across Mexico in summer 2013 and Lewis set the words to music.

Lewis, from Aylesham, decided to teach himself to read music when he was 15.  Once he’d got himself a piano and a teacher he progressed at breakneck speed, achieving Grade 5 in 2 years.  Lewis is now in his final year at university studying musical composition and his ambition is to compose and direct a Broadway show. He cites Leonard Bernstein and Stephen Sondheim as his musical influences and admires their craft and creativity.  His favourite musical is Sweeney Todd.  He has composed solo piano and saxophone pieces, directs two string quartets, has been musical director for several shows and also teaches piano and voice, but Dreamlands is his own very first musical. Lewis says that the whole point of a composer is to work in the community and it feels amazing to hear his music being performed by an enthusiastic and talented group of people.

Dreamlands is performed by The Really Promising Company and was inspired by Turner’s paintings of Kent.  The main story is set in Turner Contemporary in Margate and is a poignant tale of lost love and fading memory – a confused elderly lady takes one final nostalgic trip to Margate with her daughter – the places they visit remind her vividly of her youth, her hopes and dreams and her first love. The tale is interwoven with events and characters from East Kent’s history and is moving, funny and very entertaining.  Original artwork by William Rhys Jones forms a backdrop and Christine Ramsay directs.

Jane and Lewis are pictured here in the shelter on Margate beach, where TS Elliot wrote his poem ‘The Waste Lands’.