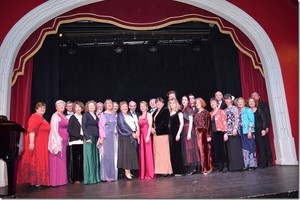 This show marked the 120th anniversary of Ivor Novello's birth and took a peep behind the scenes at the songs, life and loves of this ‘Master of Musicals’.

With effortless glamour he became the darling of British society and numbered amongst his friends the most influential men of the day.

Behind every great man there is a great woman and in ‘Mam and Boy’ the huge influence of his mother, Dame Clara Novello Davies was recognised!